What makes shakkei compelling?
Architect Makoto Yamaguchi and photographer Kentaro Kumon set out on a journey in search of answers.

Architect Makoto Yamaguchi began thinking about shakkei, or "borrowed scenery," of Japanese gardens, and set out on a journey with the photographer, Kentaro Kumon. While visiting famous gardens all over the country, they contemplated aspects of Japanese culture and looked for what makes borrowed scenery fascinating. As they captured this on camera, the resulting photographs also brought about a new discovery. They had found "neighboring textures," with different materials existing side by side.

The duo’s journey begins with the modern shakkei (borrowed scenery) of the mixed sceneries of the old and the new, found in the famous gardens of Tokyo. It ends in the details of the sceneries in the traditional gardens of Kyoto, a city with a rich history. These are appeals of the Japanese garden, seen through the distinct eyes of an architect and a photographer. Their endeavor becomes one that is not confined by the garden walls. 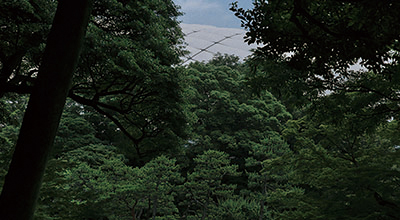 While working on many international projects, the architect inside me decided to stop and think about what inspires my designs. I returned to my alma mater, Tokyo University of the Arts, and enrolled in a doctoral course in the history of Japanese architecture. It was then, seeing how modern architecture has become the shakkei, or "borrowed scenery," for Japanese gardens, that I realized it had something in common with my pursuit of creating designs that resemble natural landscapes. And so, I started my journey alone, visiting gardens with borrowed scenery. 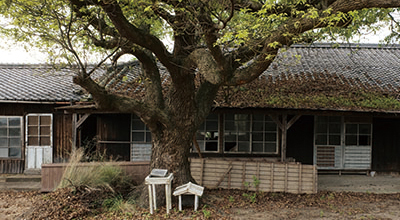 On a small island in the Seto Inland Sea, there is a wooden one-story elementary school. Built in the Meiji era, it is now abandoned, but surrounded by beautiful nature. Here, I hope to create a garden borrowing the scenery of the mountains and the sea.