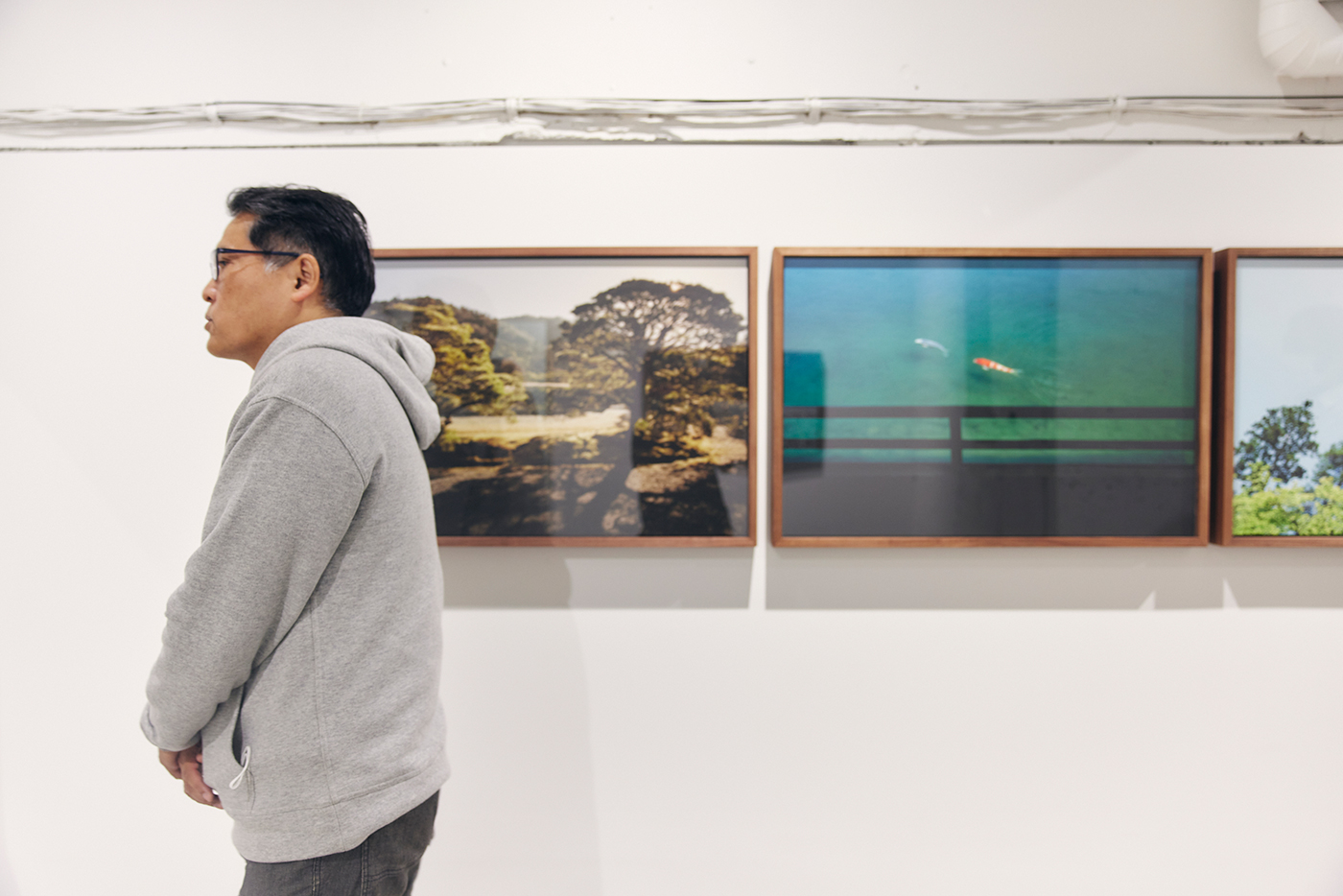 Updating the world of Mitate

When I saw the work of architect Makoto Yamaguchi and photographer Kentaro Kumon in their project "Shakkei - Neighbouring Textures," I once again thought of how the Japanese garden is an extremely luxurious form of expression. Using a variety of natural materials such as plants and stones, the landscapers sculpt a space by combining different shapes and textures to express a highly abstracted world view. This grand and elaborate three-dimensional collage or assemblage are described by Mirei Shigemori, a leading garden historian and landscaper.

"Abstract expression in Japanese gardens does not necessarily use stones as stones, but stones as materials for expression such as mountains, water, etc., or pruned plants as plants, but as objects of various forms, all of which have other expressive contents apart from their own essence." (Mirei Shigemori, "Kokukoku-kore-koukoku" Abstraction in Japanese Gardens, Hokuetsu Shuppan, 1974)

This kind of abstraction can be called Mitate. What is interesting, is that the abstraction is not limited to the materials arranged inside the garden. Because a garden is a space that has a connection to the outside world, the emphasis is on Shakkei, in which mountains and buildings located behind or beside the garden are also incorporated into the view as materials. The Shakkei gives the garden a deeper perspective and completes the view.

The reason why I called Japanese gardens extremely luxurious is that such an elaborately created utopia would quickly fall out of order if not continuously managed by a skilled gardener. However, the original landscaper does not deny the changes that occur over time. He hopes that the garden will grow beyond the original intention by merging the human will with the continuous generations of nature. 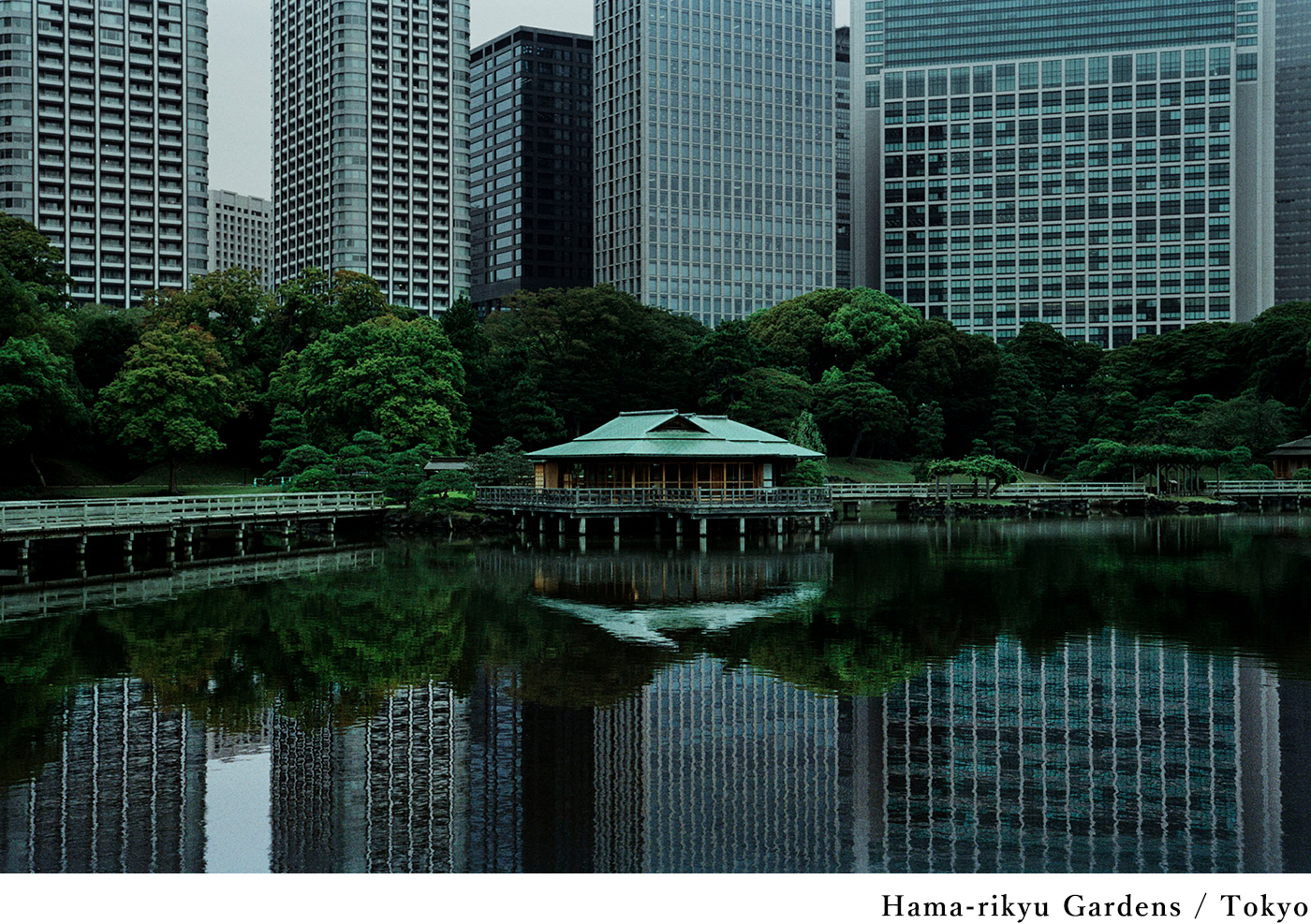 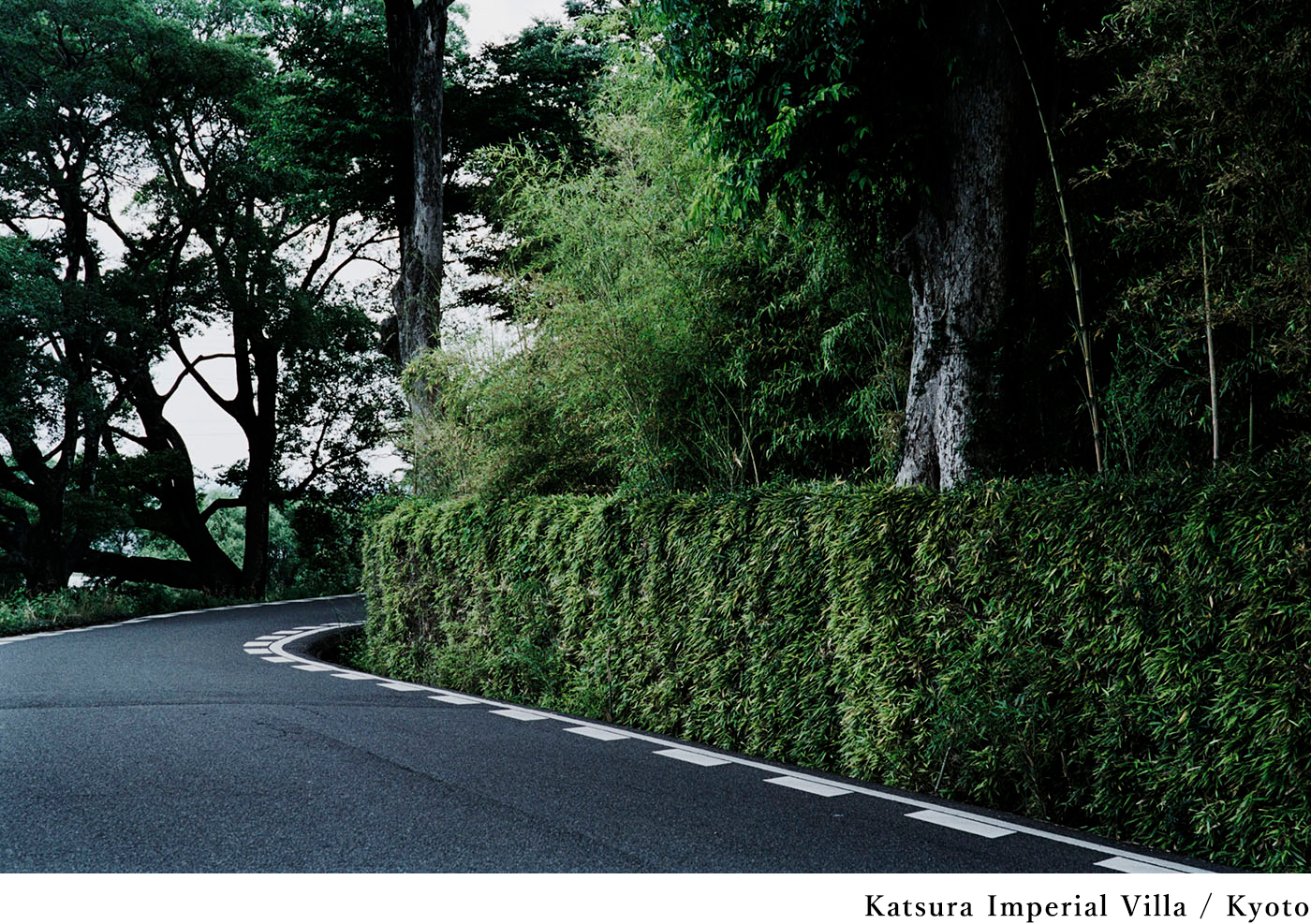 From this point of view, the famous gardens that Yamaguchi and Kumon visited in various parts of Japan have already matured. Their approach to this maturity is innovative. Although there were only a few photographs taken from a bird's eye view of the landscape, many were fragmentary images of the landscape's surface taken at a moment when they sensed the visual resonance of the materials. As Kumon walks in and out of the garden, he triggers the shutter with a small film camera as if reacting to the impressions he encounters. This is a typical snapshot technique, a choice to express the simple surprise of seeing in real life unpretentiously.

This approach shows Yamaguchi's awareness that the possibilities of Mitate have now surpassed the intentions of the landscapers. The reason why he chose Shakkei as the theme of his work is also evident in this.

The change of time is harsh, and the perspectives assumed for the outside of the well-kept gardens have already been lost. The contrast is sometimes too strong. Typical examples are the Hama-rikyu Gardens with high-rise buildings in the background and the Katsura Imperial Villa with lush hedges and asphalt road curves.

Many people argue that this situation is killing the garden as a living work of art, and it is not uncommon for visitors to be puzzled by it. However, we can clearly see from these two photos that Yamaguchi and Kumon have a positive attitude toward change. 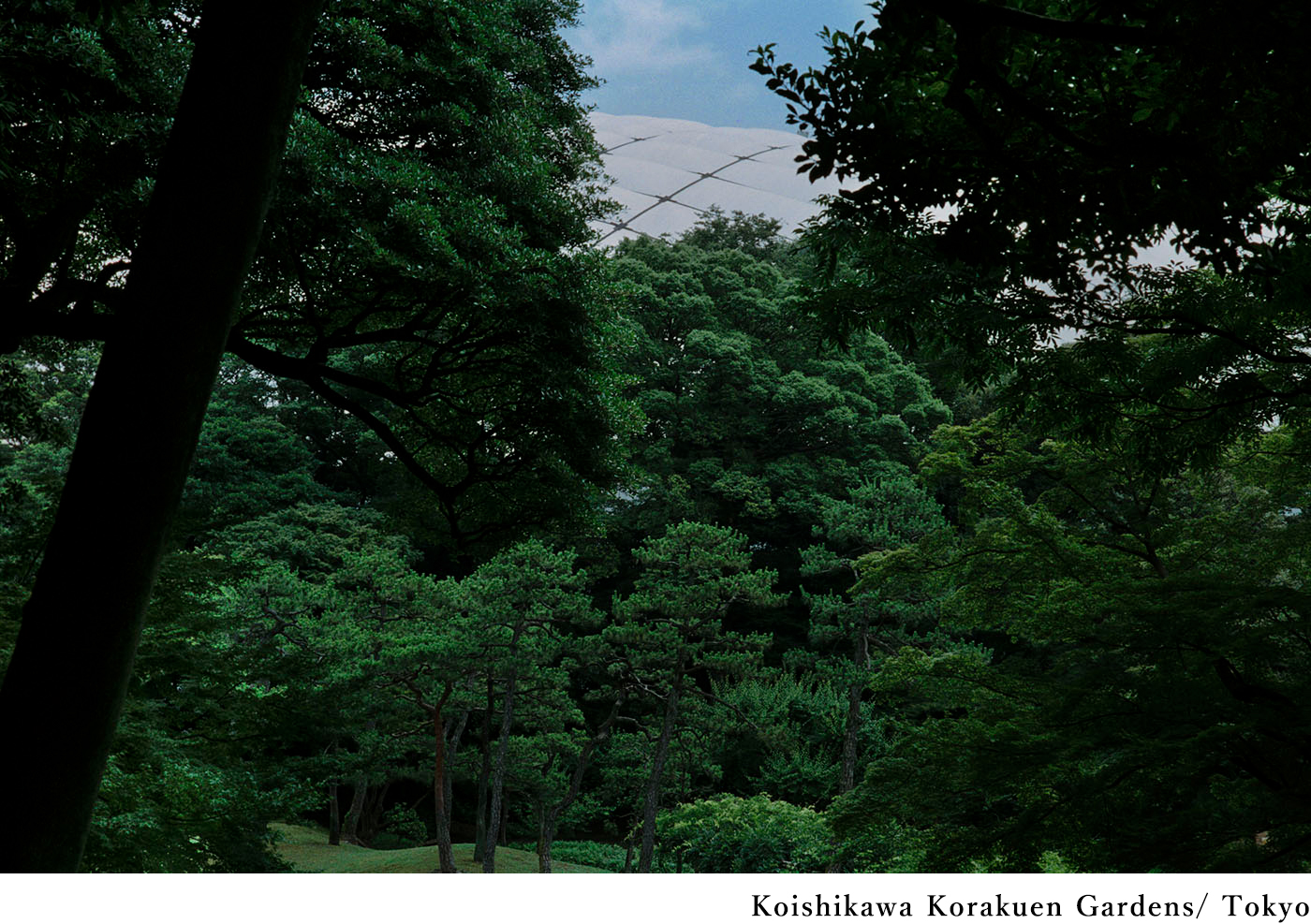 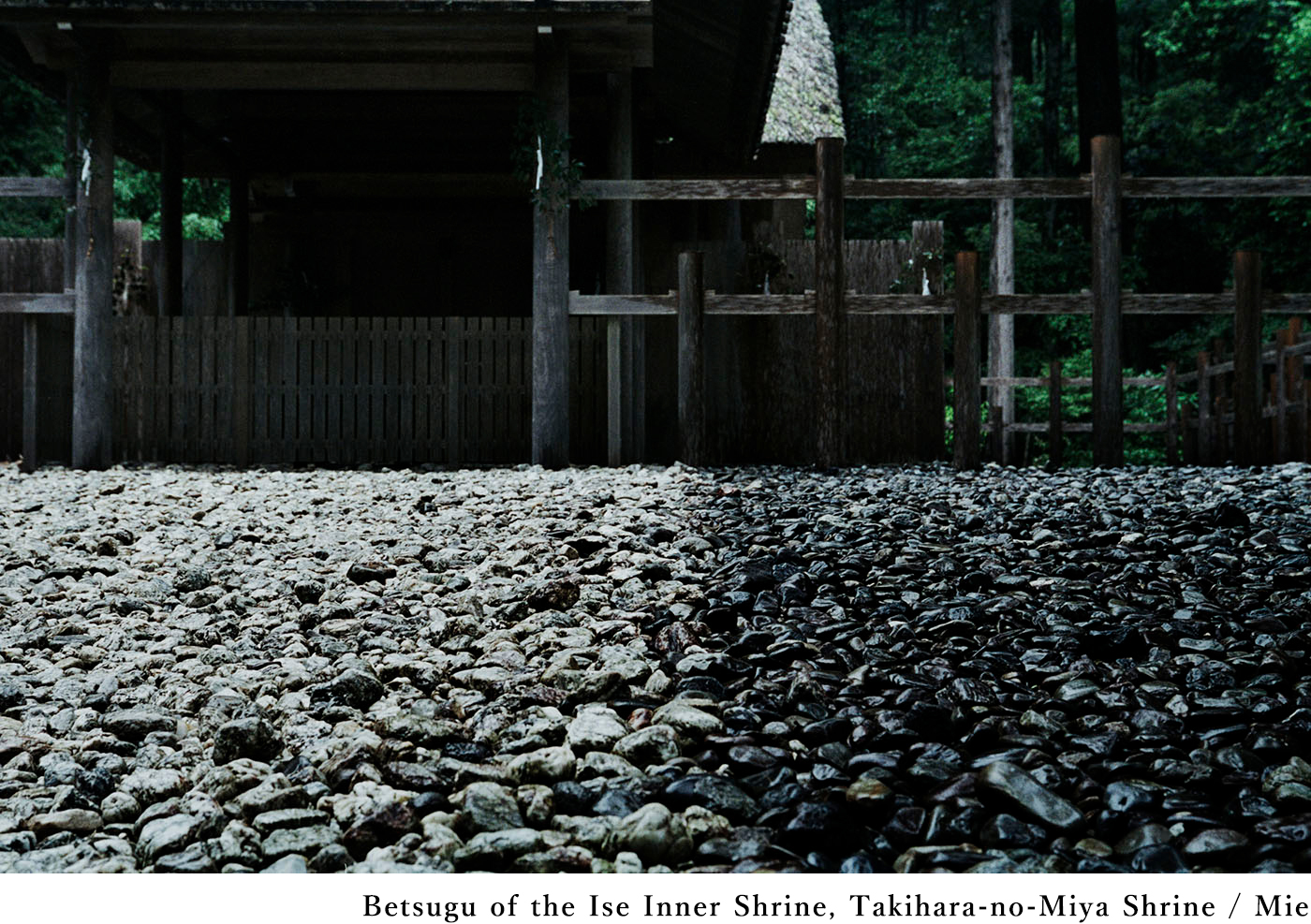 For me, the work that resonated the most was a snapshot of the Koishikawa Korakuen Gardens, showing the white tent of the Tokyo Dome through a gap in the trees. The gentle way in which it was captured seemed to me to be the very gaze of those of us who have already naturally accepted this artificial material as a new Shakkei. On the other hand, it is also interesting to note the separation between black and white paving stones of the Takihara-no-miya, an outside shrine of the Imperial Grand Shrine. I was pleasantly surprised by his direct response to the form of Japanese belief in nature that has continued from the ancient Shinto religion.

By reading the conversation between Yamaguchi and Kumon, it is clear that Yamaguchi encourages Kumon to avoid preconceptions as much as possible and to look thoroughly at the surface of the garden. Photographs taken in such a way as to point frankly to what has not yet been named can shake people's perceptions from the core and become the beginning of new thinking.

In such a way, the architect and the photographer are working towards discovering new beauty or the renewal of perception. The aim is to renew their understanding of Japanese gardens and update beauty through a different vector than the conceptual world that Shakkei and Mitate have traditionally aimed to achieve. I can't wait to see how the photographs will change in the process. 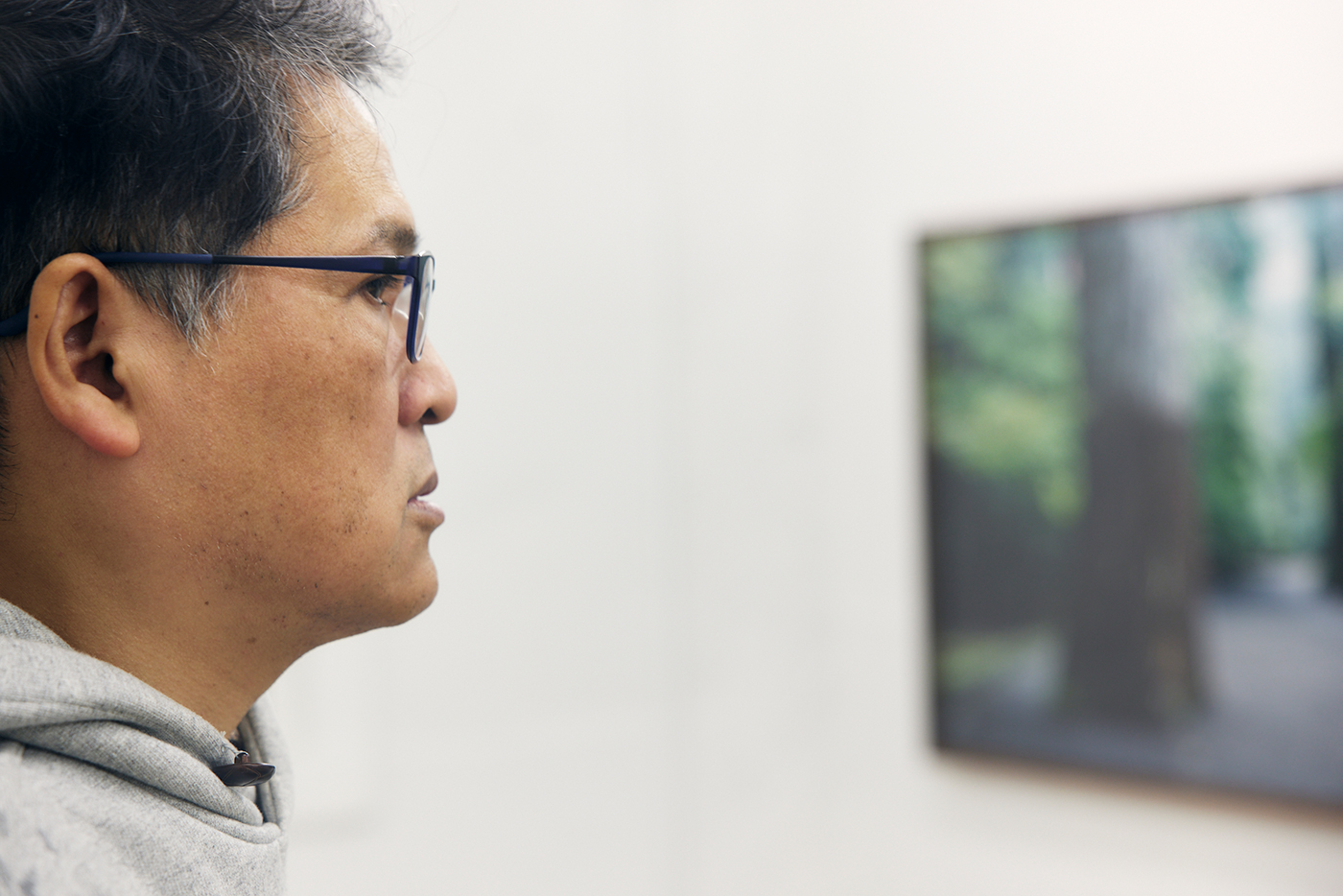 Interview and text by Mai Tsumuraya