The historic Japanese garden built in 1629 within separate Edo residence of the Mito domain, used to have Mount Fuji as its shakkei (borrowed scenery). The garden is now adjacent to an amusement park that bears its name. If we take the Tokyo Dome, with its abstracted white form and incomparably enormous scale, as a shakkei to the Koishikawa Korakuen, the structure might be considered a piece of nature, like a mountain. The garden is designated as a Special Place of Scenic Beauty by the national government.

What were your expectations for Korakuen?

I remember being so impressed by the perfect balance of Korakuen, a historic special scenic site, and Tokyo Dome, a modern athletic stadium, overlaid to produce a new landscape. I knew instinctively that this would be a spot I could not miss for this project about shakkei.

So for Mr. Yamaguchi, seeing how modern views and scenic beauty coexist in Korakuen was a truly moving experience. Mr. Kumon, on the other hand, took photos from a different perspective than that of Mr. Yamaguchi.

Kumon:
In the beginning, there was the concept of "photographing a new shakkei," so it was easy to understand the relationship of shakkei at gardens like Korakuen or Hama-rikyu. In other words, my mission was to abide by the concept, so that was the only thing in mind. First of all, when you think about a "baseball stadium," you would only think about the interior and not the exterior. I am a Hanshin Tigers fan (big rival of Yomiuri Giants, the team based in Tokyo Dome), so Tokyo Dome feels like enemy territory. Even though I live in Tokyo, I rarely get off at Korakuen station, so I never really looked at the dome's exterior. I don't know if this is an excellent piece of architecture, but I felt that the soft, rounded, white form was beautifully integrated with nature. However, the mission in my mind was to photograph the relationship between shakkei and the garden, so when I became aware of the importance of the dome, pond, and forest in tandem, I ended up having no choice but to stand straight in front of the scene. 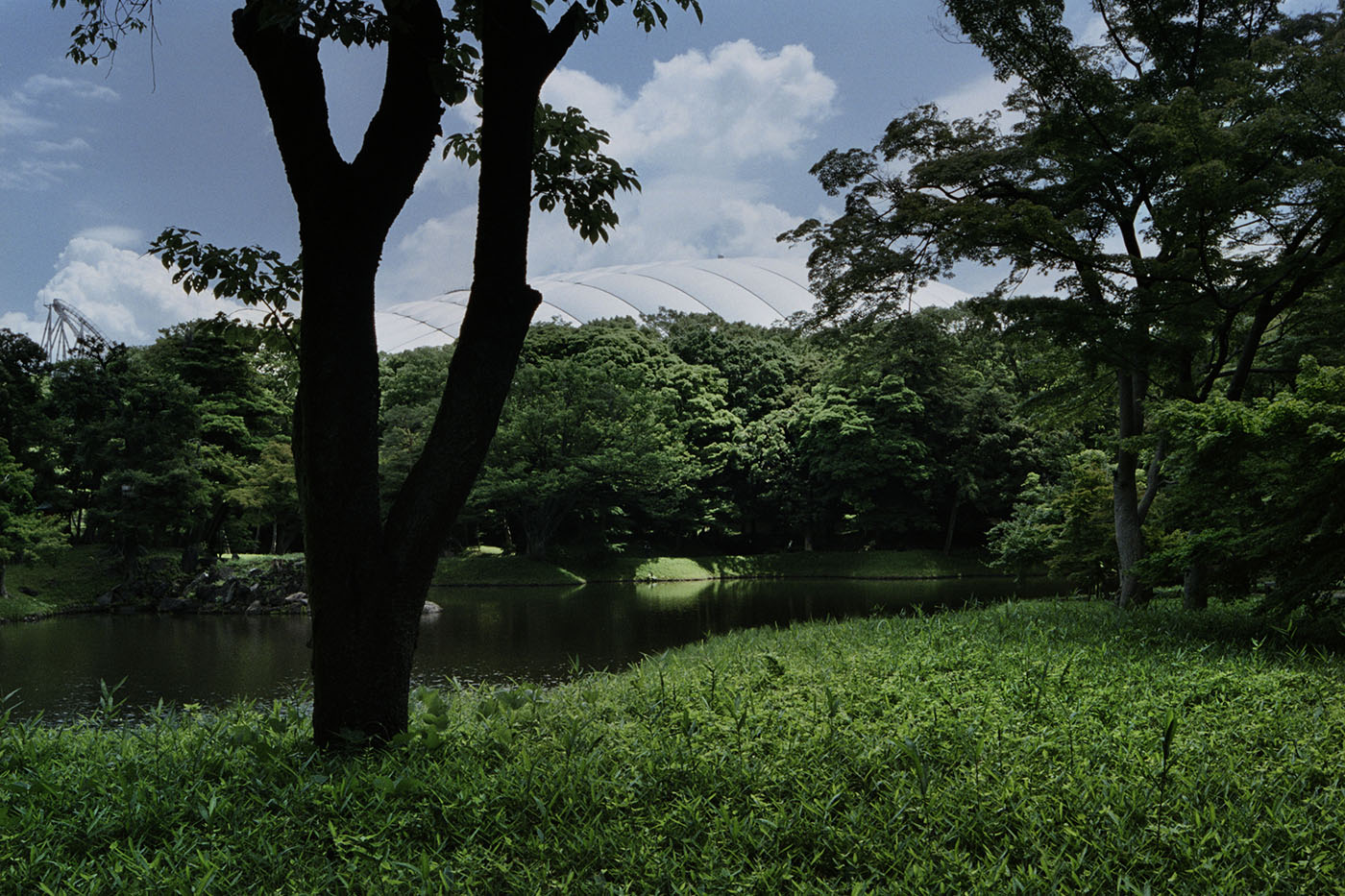 That was good enough for me, and as I walked around the garden, I could hardly see the pond and the dome anymore, so I thought I was done photographing this shakkei. There was a small hill, and when I climbed it and turned around, it wasn’t like I thought, "this is a nice scene," then took the photo. It was more like I pressed the shutter instinctively. 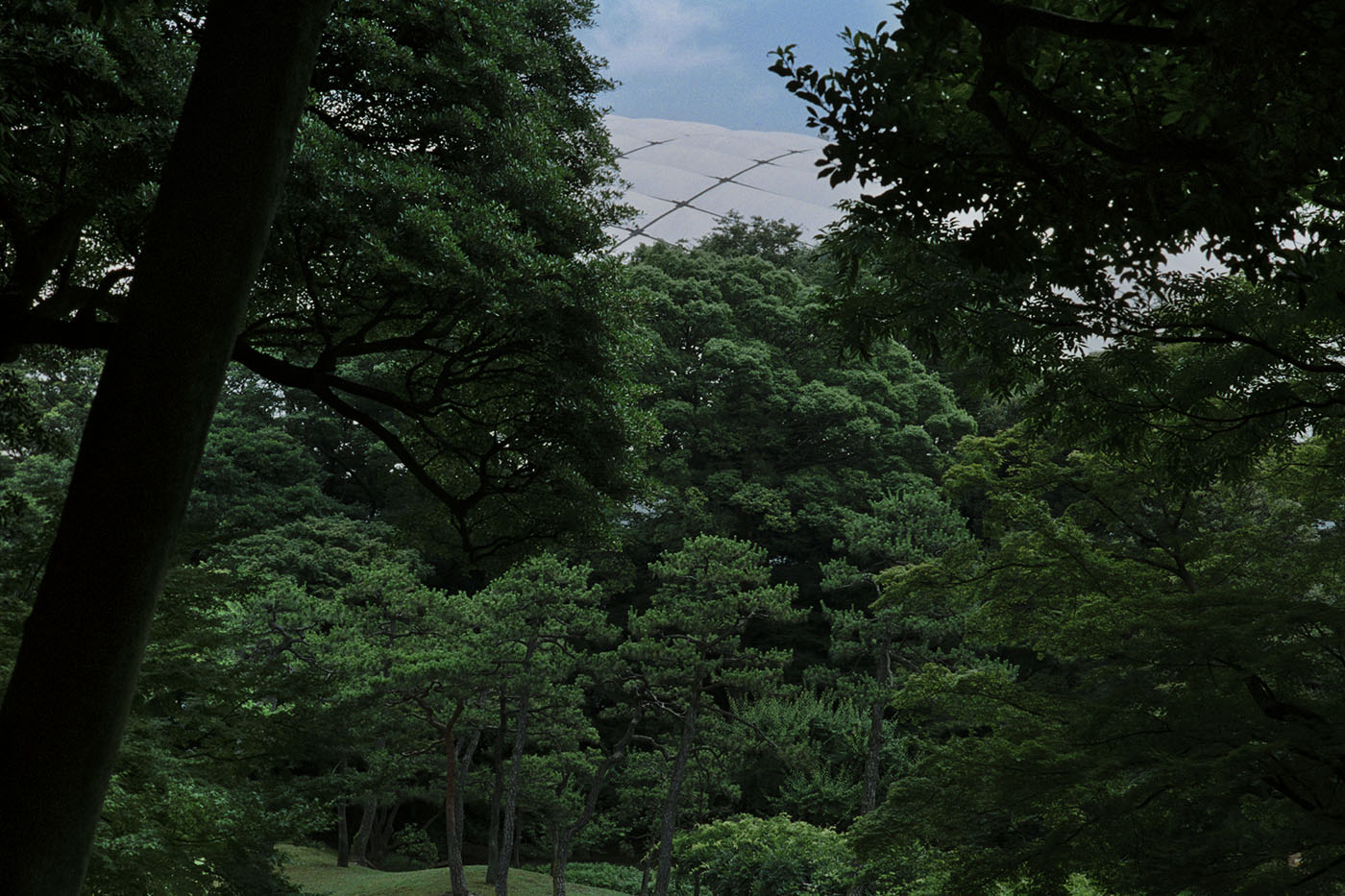 It's close to when I usually take a snapshot. With this photo, you can’t tell if it’s a garden that’s pictured, so it kind of fails at the mission of capturing the relationship between the garden and shakkei. I felt like it wasn’t serving the intended purpose. I just decided to keep it in the collection of photos that I showed Mr. Yamaguchi after shooting. Gradually, the project shifted from collecting scenes that explain shakkei to something more in the direction of this photo.

Which part of the photo did you like, Mr. Yamaguchi?

Yamaguchi:
To be honest, I wasn’t sure if I liked it. This first photo was just like the one I had taken because that spot certainly creates a beautiful image when trying to take the Tokyo Dome as a shakkei for the garden. I thought this spot was the clearest and the most beautiful, but it lacked an impact as a photograph. It didn't give me the shock that I felt when I first saw the scene in person. I felt like that first photograph would take us in a different direction. But when I saw Mr. Kumon’s other photo, I thought, "Yeah, this is it." I don't know if the photo carried a specific strength with it, per se, but it shows the Dome as an abstraction and a symbol, something that people can’t tell what it is but is something of an enormous scale, existing beyond the forest. To be able to communicate that through this shot— I was utterly impressed with Mr. Kumon.

What's interesting about this project is that we get to rediscover things by way of photographing them. In reality, we are looking at the same scenes, but we have discoveries that keep driving the process forward through the photographs.

Kumon:
After this, we visit the gardens in Kyoto, but Higashiyama, which is considered the origins of shakkei, is much weaker, and you wouldn’t be impressed by them. Of course, the scenery is something completed as one.

Yamaguchi:
Well, shakkei is not meant to astonish people, but it is something that just happens to be there. The impact of the Tokyo Dome is probably made possible because it is a modern-day shakkei. Korakuen Garden, just the area around the pond, was boring for us until we noticed the relationship with the Tokyo Dome. It’s just trees growing around the pond. It isn’t easy to know how to perceive it and make it enjoyable. Also, we don't quite know what kind of Japanese garden it used to be. Japanese gardens are not architecture, so the way they look changes depending on the management of each era. The trees’ height, trimming, and where the grown plants are cut are controlled by each era’s gardener or owner’s sensibility. Thus, there is no way to know about the true state of the garden. However, the view changes completely with the Tokyo Dome in the background, which I think is very valuable as a modern shakkei.

You’re saying the landscape of Japanese gardens changes its time. The values of each era are reflected in the gardening styles— the differences in heights and trimming styles of trees creates different views.

Yamaguchi:
In the Meiji era, Korakuen Garden probably had Mount Fuji as its shakkei. We don’t see Fuji anymore, but to think that the Tokyo Dome has taken its place as the shakkei, that a modern building becomes the successor, is fascinating. The Dome is now like a white mountain. 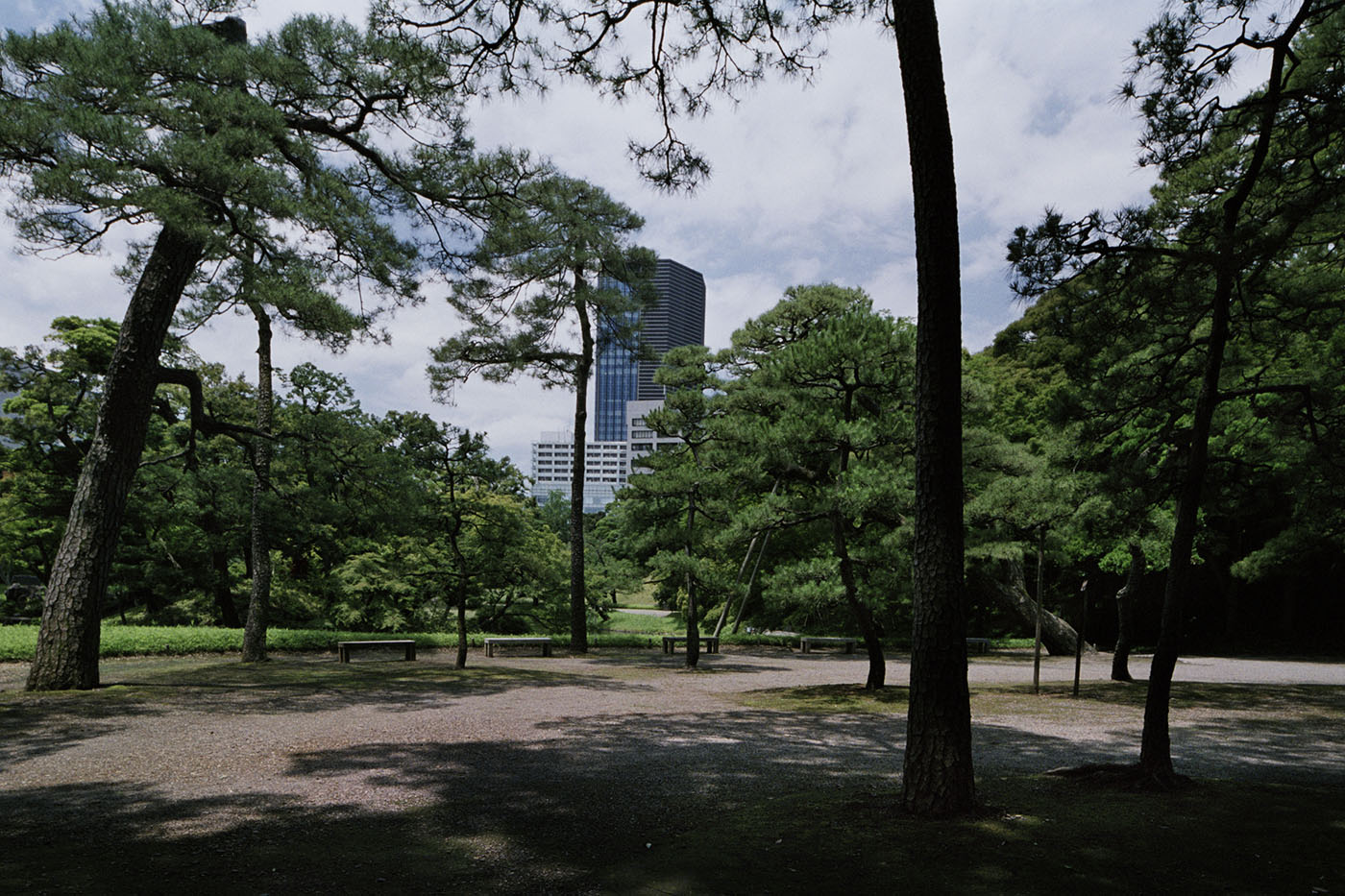 Kumon:
Well, on that topic, I’ve also kept this picture. I thought the way the buildings appear was interesting. We ended up deciding, later on, that it wasn’t much. I think we talked about how the architecture itself isn’t too impressive.

Yamaguchi:
When you see a building, you can usually tell what it’s for, whether it’s a condominium or an office. It's hard to accept something that conveys that kind of information as a background. What makes the Tokyo Dome so intriguing is that you can't tell what it is or its purpose. Of course, there is a concept behind the dome as a piece of architecture, but the result is a big, white, vague mountain. It may not have been designed that way, but that is what we see. When it comes to high-rises and more common buildings, the human intentions are too obvious, like changing the texture between the middle and upper floors, so it’s difficult to read them as a shakkei. Japanese culture is about making the most of materials, so a building that has been designed and fabricated is not quite right.

That is why you use the word "texture" for the title. If you can see the intention of the building, it becomes something alien.