The temple was originally the villa of Emperor Go-Mizunoo, and it is said that he was involved in the creation of the garden. After completing the Shugakuin-rikyu (Shugakuin Imperial Villa), also built by Emperor Go-Mizunoo, the villa became a temple in 1678. The garden with the shakkei of Mt. Hiei has always been one of the most representative gardens in research papers on Japanese gardens, and the quality of the shakkei is among the best. The garden is designated as a Place of Scenic Beauty by the national government. 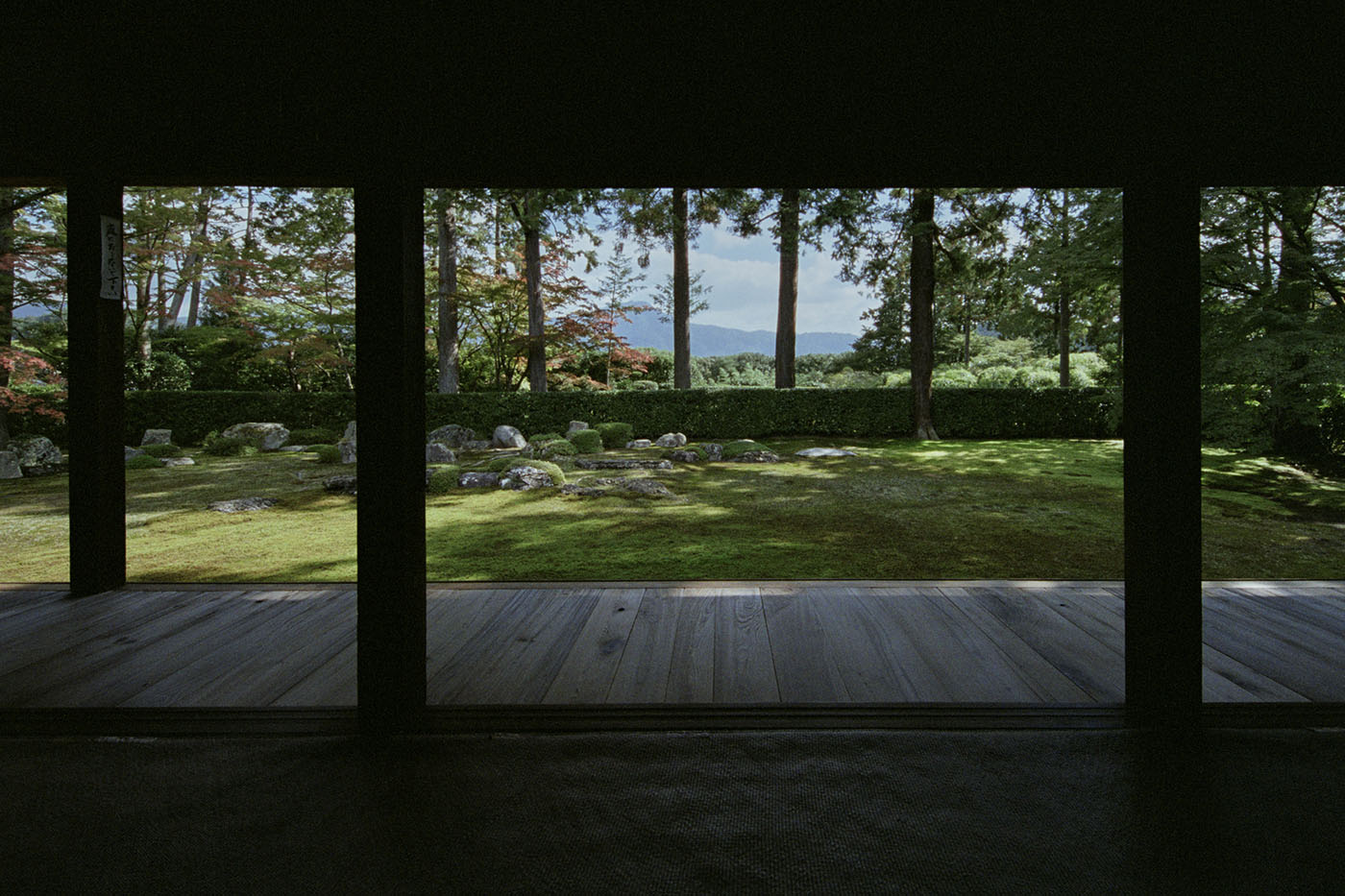 Yamaguchi:
Entsu-ji Temple is a prime example of a shakkei garden. It was not a temple at first in the early Edo period, but Emperor Go-Mizunoo created the garden. He also built Shugakuin-rikyu. He searched for the most beautiful place to see Mt. Hiei and decided on this location. Not many emperors have created gardens, and I imagine that he chose the best place. But it was also a challenging place to capture in a photograph. In the first place, a shakkei garden would have a "viewpoint" from which you are supposed to look. Entsu-ji Temple is not a strolling garden but only has a fixed viewpoint. Everyone would take pictures from there and admire the shakkei. There is no other place to take pictures, so having Mr. Kumon take his photographs was difficult. 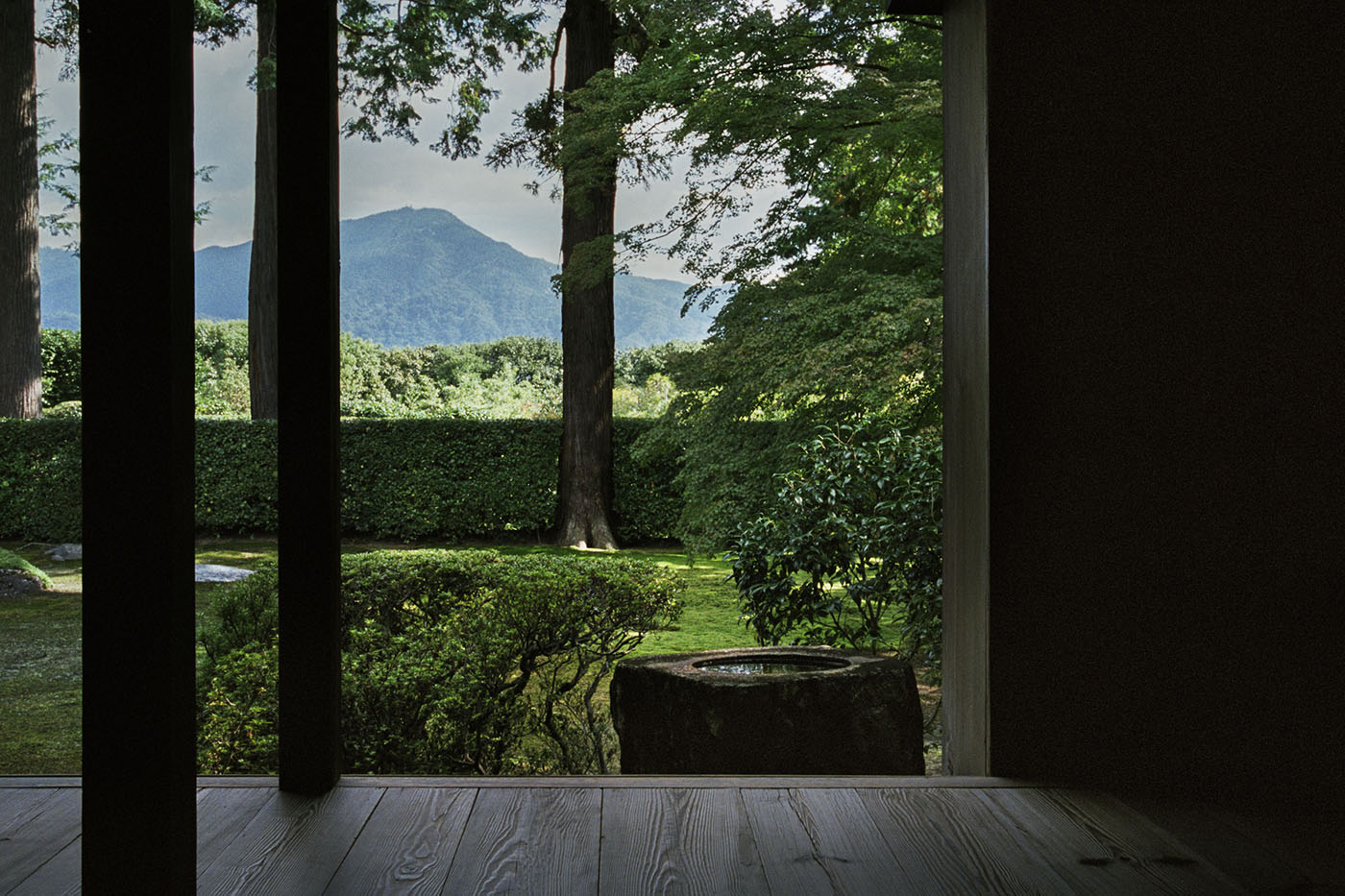 Kumon:
If there is a correct way of viewing, it’s, of course, best to look at the view from the right conditions. One of the reasons this location was so difficult was because the "borrowed” landscape of shakkei that I’m trying to photograph is something that is so far away. I cut trees and other objects out of the picture to frame the scene, but even with the naked eye, it’s hard to notice the shakkei unless you’re looking for it. On the other hand, if you zoom in further, the garden elements would get cut out entirely. In that sense, having a viewpoint is nice. While I was experimenting with the photograph, Mr. Yamaguchi told me that the surface of the water in the hand-rinsing basin and the floor were aligned. I began to think that this was somehow strange and thought that if I focused on these features, I could explain the shakkei, too.

Yamaguchi:
Entsu-ji Temple is the prime example of shakkei, so I think it is a very well-done landscape. Even when viewed with the naked eye from the viewpoint, you can see Mt. Hiei in the distance, framed by the trees, which is a composition that evokes more imagination than just seeing the mountain alone. I feel that the way the mountain is seen changes depending on the viewer's awareness. In that sense, if you don't know how to look at a shakkei or come without knowing that it is a shakkei garden, I’m not sure if it would even occur to you that it’s a garden for viewing Mt. Hiei. The shakkei is that subtle. The highly precise planning of the garden makes it look as if the mountain just happened to be there. In the Heian period (794-1185), one way to show the difference in status was through fragrance, and another was through color. Unlike Western culture, which flaunts status with jewelry and other ornaments, people showed their dignity and prestige through the non-material shared senses of fragrance and color. The same is probably true of borrowed scenery, where one can know the coming of the seasons by looking at the mountainside from one's own living space. For those who compose waka poems, the mountains as a shakkei may inspire them. It's subtle, nothing with a strong message, just something for the viewer to feel.

Kumon:
In photography terms, it is close to the author trying to communicate a story so that the viewer can be read from the photograph even without context. That's a challenging thing to do. It's even more difficult to capture the true value of such a garden in a photograph.

Yamaguchi:
I think it’s very difficult to capture Japanese culture in a photograph.

So a shakkei is something that, by definition, is appreciated through words and images. It must also be essential to focus on the subject by framing the scenery. In the case of Entsu-ji, we are made to focus on the borrowed scenery in the distance, or rather, we are guided.

Kumon:
When I visited this place, I realized that this is the essence of shakkei. I thought it would be more eloquent, but it is very subtle. However, I have come to understand that it cannot materialize if it is too loud or slight. To use an analogy from waka poetry, you may not compose a waka poem if you can see too much of the shakkei. There would be no room for imagination. I think it comes down to trying to put the scene into words because it’s too far to grasp or looking to borrow something from the landscape.