This garden was created by an antique dealer in 1804 during the Edo period (1603-1868) and was open to the general public as a private garden where flowers bloomed throughout the four seasons. In 1939, it was transferred to the City of Tokyo and became a public garden. It is more of a flower garden than a Japanese garden. There is a store where you can buy a soda and drink it on the spot. You can feel that it is a flower garden for the people. The garden is designated as a Place of Scenic Beauty by the national government.

Yamaguchi:
There were places like Hama-rikyu where we made some predictions, and things went well, but there were many places where it didn’t go well. Even when I went to Hyakkaen in Sumida Ward with the expectation that I would see the Tokyo Skytree, but there was something off about reading the Skytree as a shakkei. Perhaps the Skytree is too designed. It is similar to the feeling that a designed building cannot be a shakkei. In addition, Hyakkaen was a garden created by the townspeople, where many seasonal flowers were planted for the people to enjoy, so it feels more casual than the other Japanese gardens. I think the Tokyo Tower could become a shakkei. Tokyo Tower is made of a steel frame, but it was built at a time when advanced processing technology had not yet been fully developed, so it is interesting that you could feel the steel’s raw materiality. In this sense, Hyakkaen is a place that did not go so well in this project. 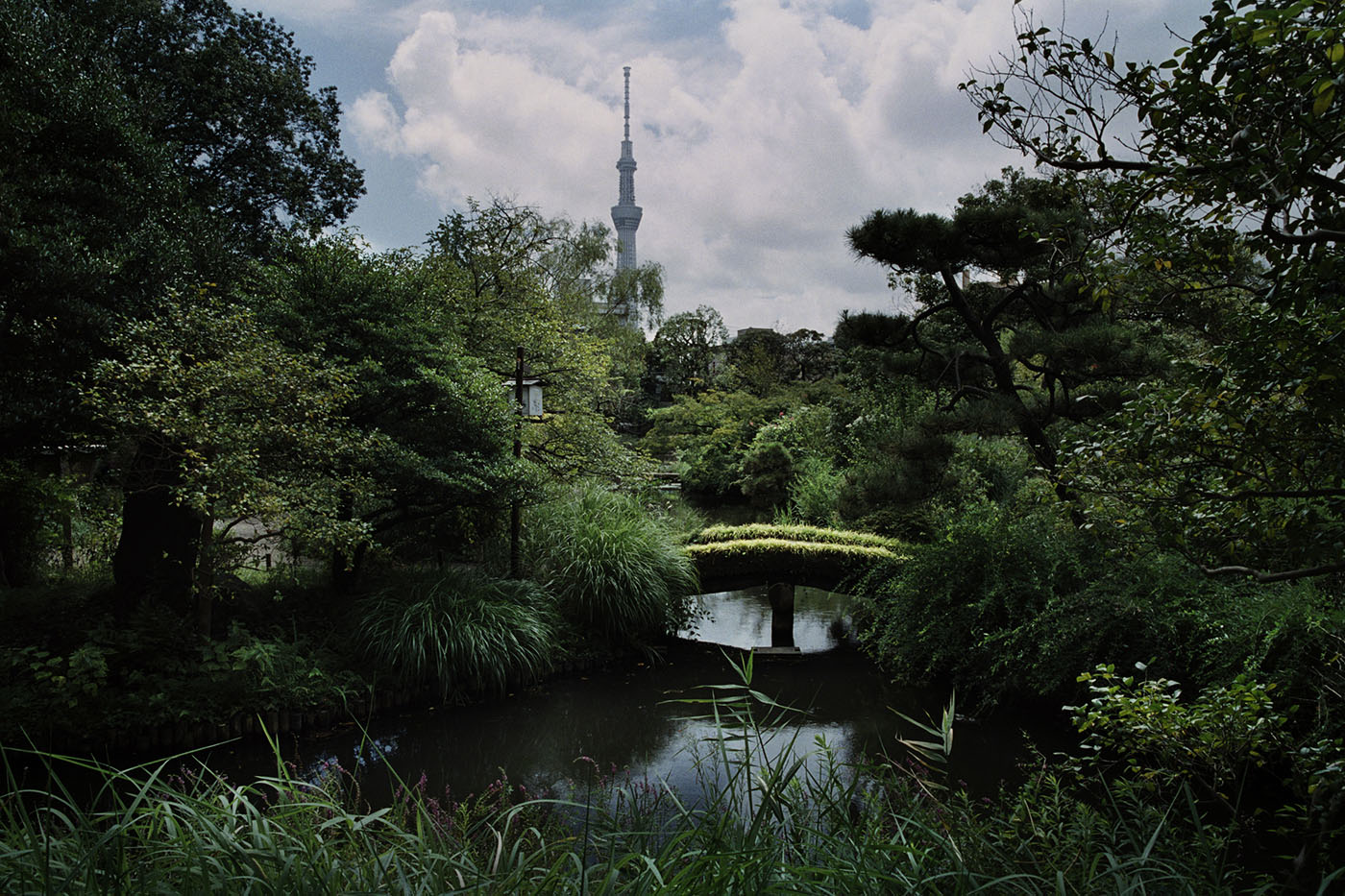 So the texture is something more interesting than the shape.

Kumon:
At the time of the shooting, there were still a lot of ambiguities about the concept of "neighboring textures", so I thought it would be enough if you could see the Skytree from the garden. The Hyakkaen had a variety of plants and had the beauty of Monet’s garden. However, it was not until the latter that I understood that it was too much, or rather that it did not fit the concept.

Is there anything else interesting here? 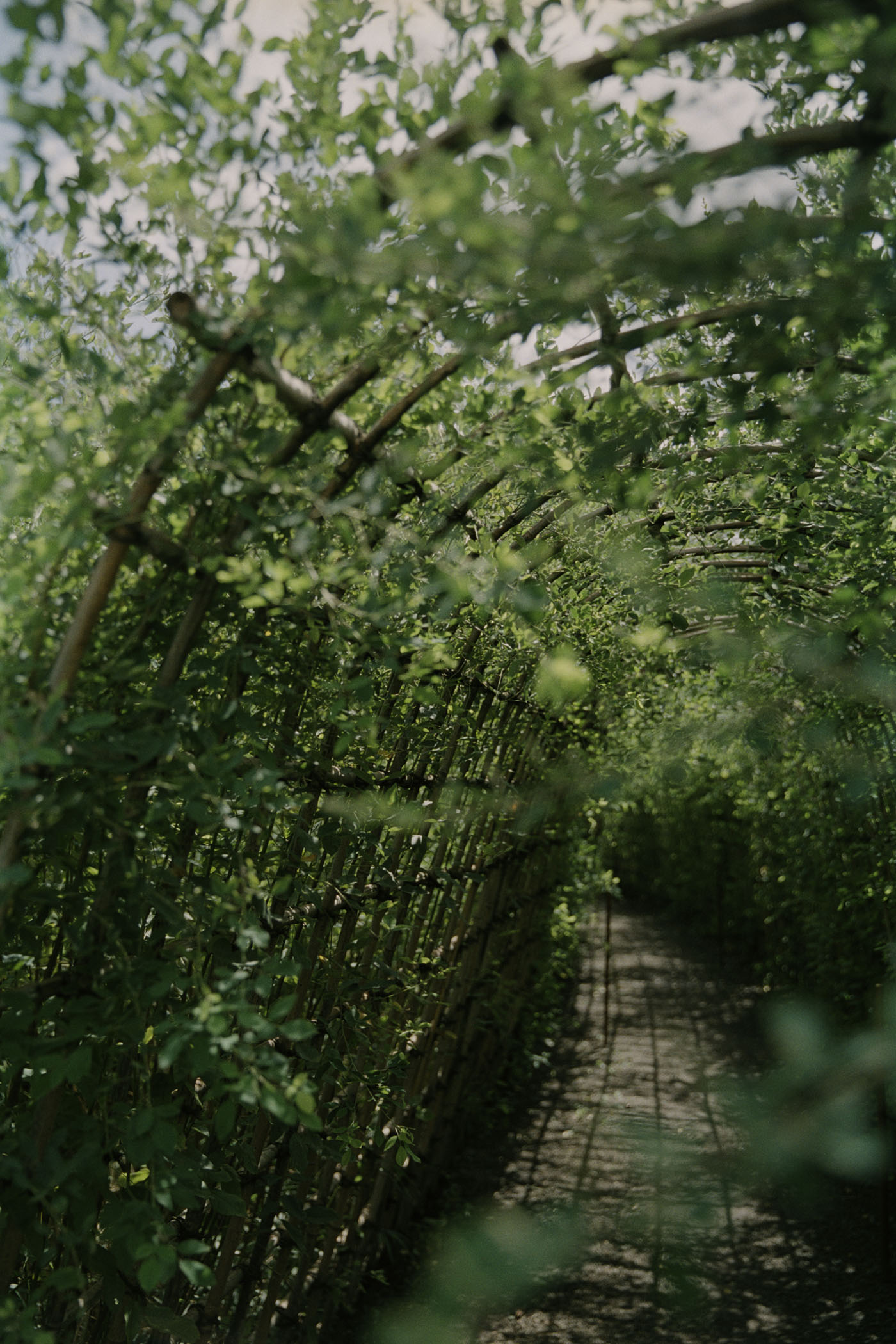 Yamaguchi:
Since we were playing it by ear, I put Mr. Kumon on the spot by asking if he could shoot the Skytree through the tunnel. Considering the project’s theme, there is not much to see in Hyakkaen. I didn't quite know what to look for. The purpose of this garden, which was created by the townspeople, was to show a lot of flowers, and I thought, "It is wonderful to see so many different flowers." The place has a sense of making the distance closer, where you would focus on things right in front of you. I think the concept of shakkei doesn't fit well in Hyakkaen because your attention stays so close, while shakkei is supposed to make you feel like your consciousness is far away. It's a fun and straightforward garden, though.

You say the sense of distance is close, but Hama-rikyu, Korakuen, and Hyakkaen all share that they are gardens you walk around.

Yamaguchi:
Even with smaller gardens, some quiet places make you want to stop and admire it for a while. In the case of Hyakkaen, rather than stopping to appreciate a particular view, you move around the garden and look at the many flowers that appear one after another. What you are looking at is not scenery but the flowers in the immediate vicinity. The distance to the object you are looking at is the same all the time, and it’s close. In the case of Hama-rikyu, the circulation around the pond is for enjoying the scenery, while in the case of Hyakkaen, it is for enjoying the discovery of flowers and not the scenery.