The garden has a shakkei of Mount Hiei. The garden itself is extremely minimalistic, consisting only of white sand and Satsuki azalea trimmings. Beyond the garden, we see the trees within the Shoden-ji grounds that appear to grow candidly, undesigned. The trees create a viewpoint toward Mount Hiei in the distance. This is a shakkei garden with a meticulously calculated structure. It was built in 1653 during the Edo period (1603-1868), but the present appearance was created by Mirei Shigemori, who was active in the Showa period (1926-1989). It is designated as a Place of Scenic Beauty by the city of Kyoto. 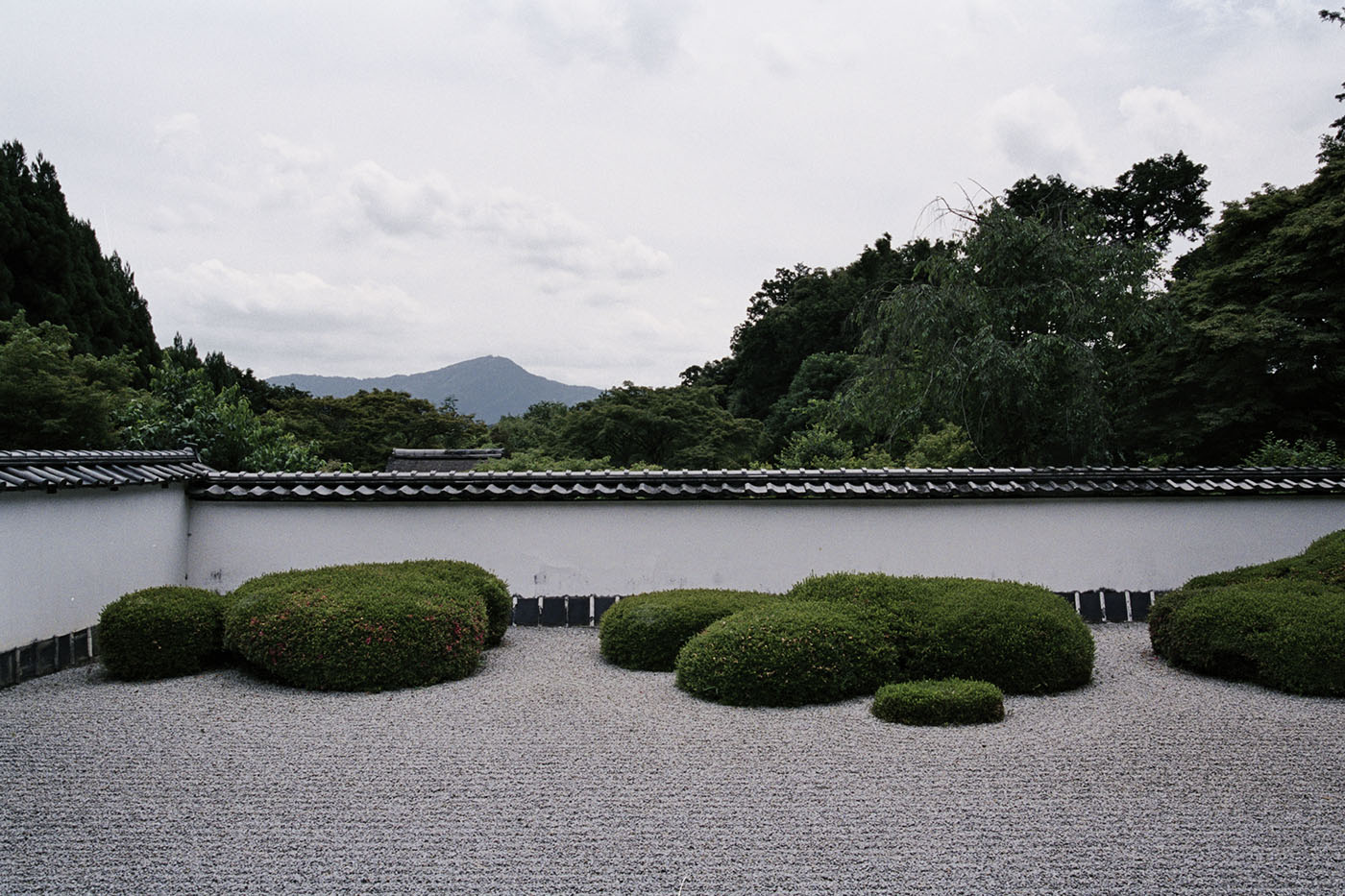 Yamaguchi:
It’s said that David Bowie shed tears at Shoden-ji. This temple, like Entsu-ji Temple, takes Mount Hiei as its shakkei. It is made to look as if Mount Hiei happens to appear in the distance, but the presentation is much more straightforward than in Entsu-ji, with the mountain appearing beyond a perspective of the garden along the sightline. It is designed such that the focus falls there. There is a fence just below the treetops, and the intention to guide the line of sight is readily perceptible. In the garden of Versailles, there is a line of trees of uniform height that stretches for kilometers, creating an incredible perspective. It's a way to show that there is something special ahead. But this is just something we feel for no specific reason. It may feel that way when I explain it like this, but without the explanation, one might overlook it. That's how I think Japanese shakkei should be: never assertive, just there by chance, but actually with a lot of thought.

Mr. Kumon, did you consider purposely photographing this location differently?

Kumon:
There is no other way. There’s a kind of restriction with the set viewpoint, so you can’t photograph from a different angle. Altering the position of the camera even a little bit ruins the lines.

Yamaguchi:
This temple also has a fixed viewpoint. Like Entsu-ji, this is a Zen temple, and many Zen temples put a lot of effort into their gardens. Ultimately, there is no problem with a garden even if you can't see the mountain behind the garden, because you just can't see it anymore. The mountains and the surrounding environment that you are using as a shakkei are not your property in the first place, so you essentially don't know what will happen. There is a case in Kyoto where a place that used to be a shakkei garden is no longer viable due to the construction of new buildings. Ryoan-ji Temple also used to have a shakkei, but it is no longer there. But that doesn’t mean that everyone is disappointed— it is still viable as a garden. It is said that one way to look at a shakkei landscape is to see the shakkei as the central element, but Ryoan-ji Temple, which no longer has its main shakkei, is still functioning without it. What’s interesting is that nothing is predetermined.

We have different ways of thinking about nature in Japan and the West.

Yamaguchi:
The city of Florence, Italy, is surrounded by mountains, and the villas of the Medici family are scattered all over the mountainside. They are arranged so that relatives' houses can be seen from each home, meaning the Medici family encircles the city and effectively has control of Florence. In contrast, what we have here is a mountain that has nothing to do with us, and a garden that is nothing more than a place for viewing it. It’s very interesting.