Takihara-no-Miya is one of the detached shrines outside of Ise Jingu. Inside the Ise Jingu grounds is Takihara-Narabi-no-Miya which, like Ise Jingu, has been undergoing a ceremonial relocation every 20 years for 1300 years. The shrine buildings are rebuilt alternately on the west and east sides of the site. According to tradition, the origin of Takihara-no-Miya dates 2000 years back, and it is mentioned in a book dated 804 C.E. The origins of Takihara-no-Miya are unknown, but it seems that a similar relocation ceremony was established in the middle of the Heian period. The area around the entrance to the shrine is filled with an unmistakably sacred atmosphere. 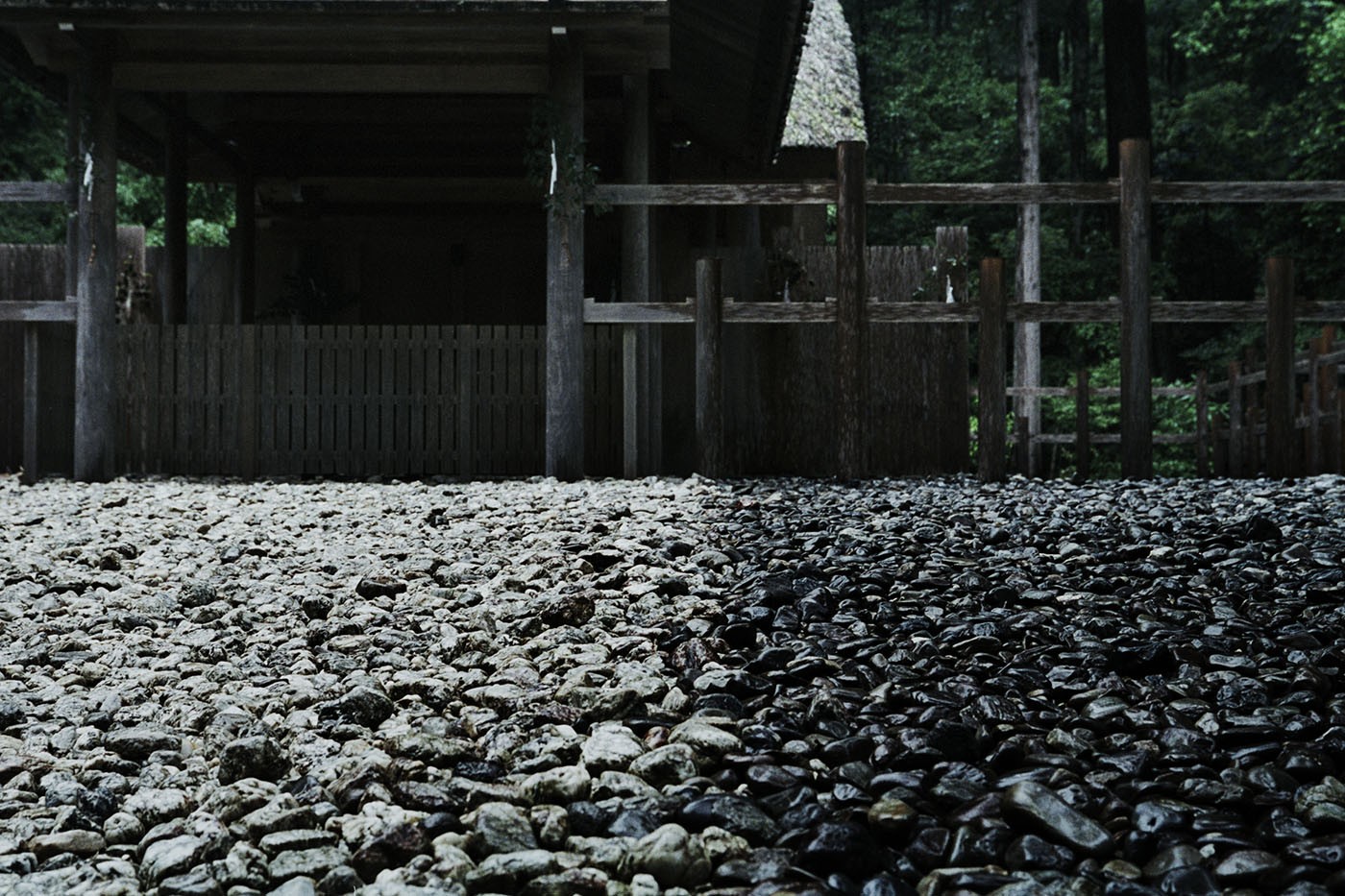 Kumon:
When I went to this area for another job, I dropped by Takihara. When I saw the difference in the color of the paving stones, I immediately took a picture of it and reported it to Mr. Yamaguchi. Although this was not a garden, I felt that we could apply the same ideas. He suggested that we should photograph it, and after returning home, we immediately went together.

Yamaguchi:
This was very shocking. It’s so straightforward. Although the shapes of the stones were the same, the different colors separate the divine from the earthly world. There is no fence or anything. It was really interesting to see how the colors of the stones were used to differentiate God’s realm.

Without needing to know the meaning, the color difference indicates that some kind of distinction is being made. 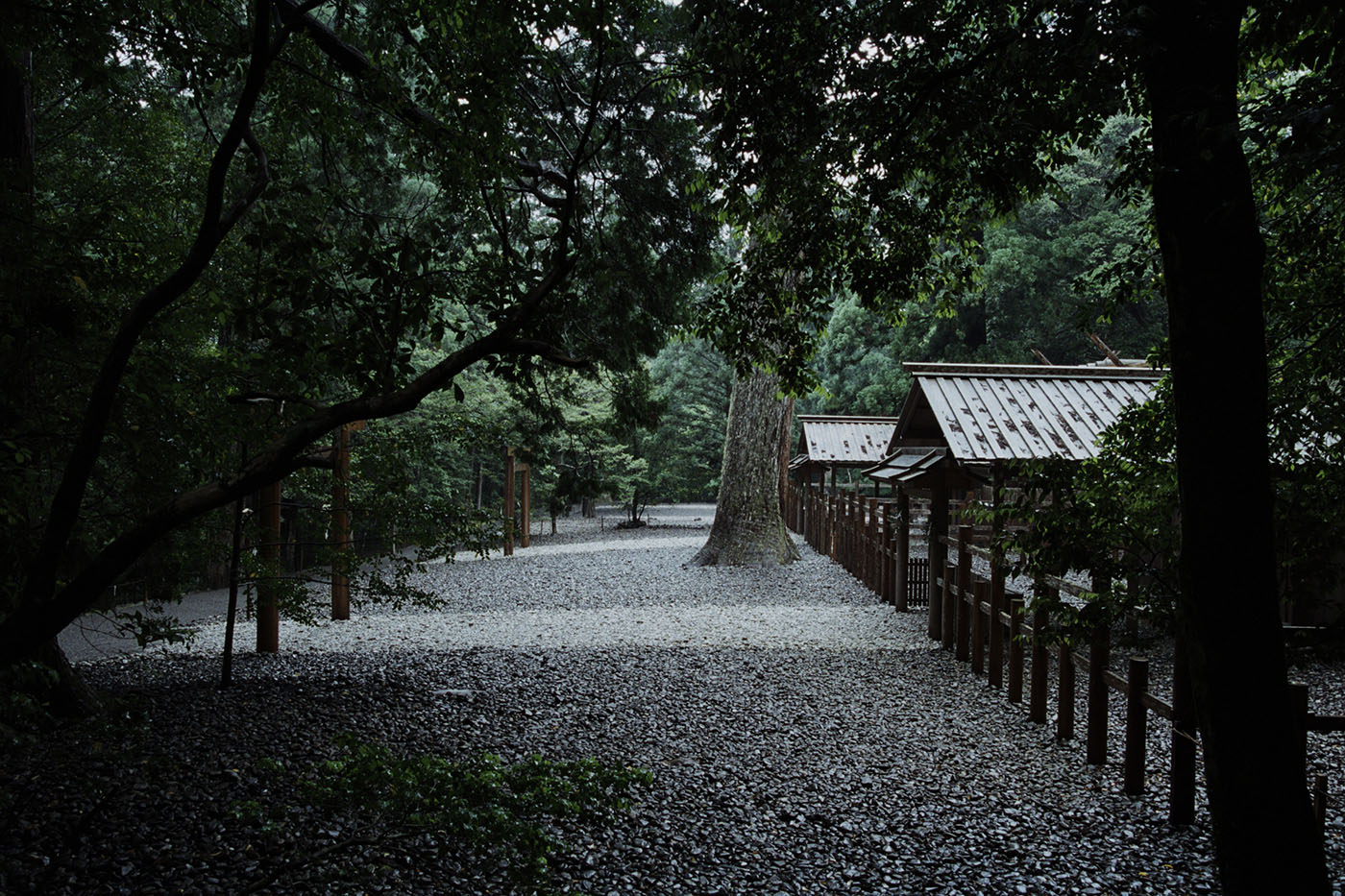 Kumon:
There are three palaces in a row here. In the middle is the main shrine of Takihara, and we visit them in order. It would have been able to just go straight through, we would see the white line and return to the torii gate each time. When you are conscious of the black and white, you end up taking that route. Unexpectedly, the Shinto priest would cut straight across... What was interesting about my experience was that when I first went to visit the shrine, I was not aware of the black and white paving stones. After visiting the last shrine, I turned around and noticed that the path was black and white. There were things hidden in the path that I would not have noticed had I not been aware of them, but when I cut them out as photographs, they became much easier to process.

Yamaguchi:
There are several smaller palaces scattered around the area, centering the Ise Jingu. One of them is Takihara-no-Miya. As I approached this area, there was an unusual atmosphere at the entrance of the shrine. On the way there, there was a large tree blocking the approach to the shrine, and Mr. Kumon said, "This is strange." but I didn't quite get it. 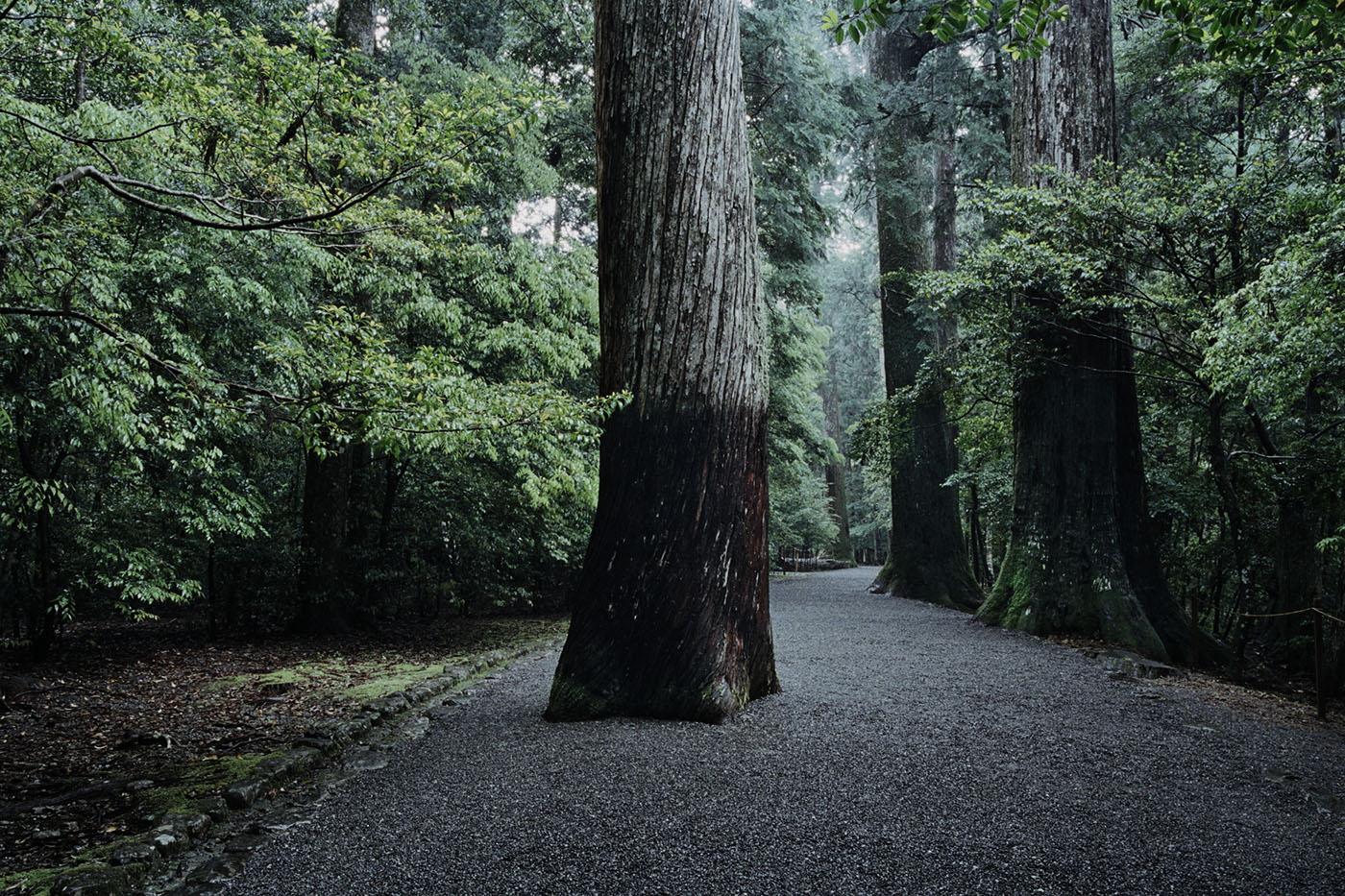 Kumon:
I was wondering why there was a big tree in the middle of the road, and I tried to tell Mr. Yamaguchi about it, but he ignored me on the way there...

Yamaguchi:
My mind was set on seeing the black and white paving stones as soon as possible… Since I had accomplished that by the return trip, I got what he was saying then.

Kumon:
The Ise Jingu Shrine also has this kind of approach, and I imagine that they are trying to prevent evil from entering. I am sure that no one thought that this tree would grow so big, and strangely, that it is still standing like this. I thought it was interesting that the people who maintain the garden have changed, but the big tree has not. That kind of meaning resonated with me more than anything.

Yamaguchi:
If you are conscious of the relationship between black and white, you can see the meaning behind the subtle difference. In this case, I thought that the large tree was in the way of the path, or something that represented a natural state, perhaps. I felt that the purpose of the tree was not apparent, or that it had no purpose concerning the purpose of the path, and that this way of being was very Japanese. I don't think it has value if it is just in the way, but the important thing is that it is beautiful. When I was working with Mr. Kumon on this project, the photos that we finally selected were the ones that we thought were beautiful. The textures are beautiful, and the nature of the landscape is very beautiful, even if too sudden. This is like the protruding rain gutters of Shugakuin-rikyu. I think that recognizing the unrelated and sudden presence of nature is also a way to bring things together in the end. There is harmony there.
Gradually, the purpose of our "duo’s journey" has changed. At first, it was for shakkei. While retaining the garden as our object, we became more conscious of what it meant to be "a place where something neighbors something else," and then it became about details, and by the end, there wasn’t even a garden there. That's how we ended up here.